Both my GSDs love the Bacon Benebone and I am super happy with this product. We aren't very diligent about brushing their teeth (I know shame on us) and our female had some gross looking brown stains on many of her teeth. Before getting them professionally cleaned I wanted to try this product as a few IG accounts I follow raved about how great it was. I REALLY wish I had taken before and after pics, no b.s, the difference is that big. She still has a little bit of buildup on some hard to reach spots way in back but it's a vast improvement overall.I monitor the dogs pretty closely and they haven't had any gum bleeding or gastric issues while using the product. Both dogs are pretty heavy chewers and have gone thru most of the handle so it looks more like a V now.The only problem we had, was jealousy over the bacon Benebone. Neither of our dogs seem to have any interest in the P.B one, which I thought was a little strange since they love their P.B dog cookies. Really hoping that once the Bacon one is gone they will start in on the PeanutButter one, otherwise it was a waste of money =/

T
The Tiny Redhead
My dogs love these

My dog likes to chew everything - the furniture, blankets, the walls, the trim, everything - and most chew toys last about five minutes before he has completely destroyed them. Benebones are the only chew toys I let him have because they're the only ones that last. My dog will work on these for hours and make minimal progress on them but he doesn't seem to mind - he has too much fun chewing! I throw them away just before they get small enough for him to swallow whole (because he will try, silly boy) and start him on a new one.My little dog likes to chew these as well but she won't start on it until it's been chewed up a bit by my big dog. I don't know if it releases more of the flavor or if it gives her a better grip to bite on. If your dog won't touch it, you might try scraping the bone up a bit to see if that helps.There is one flavor my dogs have tried that smells really bad and I can't figure out which one it is. It might be the chicken one... but you can smell it from far away while your dog is chewing it, on the towel they're chewing it on, and then on your dog's breath later, it's just awful. So if you get a stinky one and can't stand the smell but your dog loves it, please just try again with a different flavor. I'm allergic to peanuts and keep them out of the house so my dogs haven't tried that one and I don't know how it smells. But I've ordered the bacon flavor many times and the chicken one once and I'm pretty sure it's the chicken one that smelled awful. My dogs didn't seem to mind at all though.

This is the longest lasting bone I’ve ever given my dogs that they actually like. I didn’t think they would like it because when I first got the bone and took a sniff at it I couldn’t smell “Bacon” flavor. My chiweenie usually has zero interest in “fake” bones such as nylabone unless they’re edible like a rawhide, bone marrow, or bully sticks but those disappear within 30 minutes given to them. I needed something that they loved and didn’t need to be replaced so quickly. I have a crazy chewer that can tear up a couch and chomp through wood. This bone is the best thing I’ve ever known! It keeps them occupied long enough and I’m sure they’ll last forever. In the photo, my dog hogged both benebones is proof his mama made a good choice. 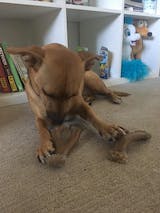 O
Opinionated
This is a great teething chew!

Our vet had stressed that teething needed a chew that was tough but would give. (There have been issues of dog's breaking their teeth on a chew that doesn't give.) This one can be gnawed on as we now have places on the bone that our dogs have chewed away. It is also safe to swallow. Finally and most important for desirable, the dogs can find it and love it because it smells and tastes like bacon. They liked the first one so much that we bought a couple more so that the chews are all around the house. (A lot cheaper than a leather shoe.)

We have a pup who LOVES chew toys....carries them with him ALL the time....no kidding! We have purchased many scent impregnated varieties for him and he destroyed them in short order. This brand and design has a scent he really enjoys and, after a couple weeks, has definitely been longer lasting than other products. I do need to note that, though I rated this 5 stars, it does run large. Our pup is a Shih Tzu/ Maltese mix and only 9 pounds. We have a hard time finding chew toys that are small enough for his mouth, sturdy, yet don't need require constant inspection and trimming of plastic shards (they "stick" in our puppy's throat causing coughing.) We cut these into 3 pieces w a "bone" shaped end on each piece - super easy to do w a hand saw and a bit of sand paper to smooth the edges. Our pup LOVES these!

6 minutes ago from Portland, OR.
Madison purchased a

11 minutes ago from Boise, ID.
Emma purchased a

15 minutes ago from Phoenix, AZ.
Jackson purchased a

4 minutes ago from Austin, TX.
Aiden purchased a

13 minutes ago from Los Angeles, CA.
Ava purchased a

10 minutes ago from Cheyenne, WY.
Liam purchased a

11 minutes ago from Atlanta, GA.
Mia purchased a

5 minutes ago from Portland, ME.
Lucas purchased a

19 minutes ago from Denver, CO.
Isabella purchased a

6 minutes ago from Hartford, CT.
Noah purchased a

19 minutes ago from Topeka, KS.
Zoe purchased a

16 minutes ago from Boston, MA.
Mason purchased a

6 minutes ago from St. Paul, MN.
Lily purchased a

5 minutes ago from San Diego, CA.
Ethan purchased a

18 minutes ago from Harrisburg, PA.
Caden purchased a

15 minutes ago from Albany, NY.
Logan purchased a

18 minutes ago from Santa Maria, CA.
Emily purchased a

15 minutes ago from Portland, OR.
Bryan purchased a

9 minutes ago from Boise, ID.
Nicholas purchased a

8 minutes ago from Phoenix, AZ.